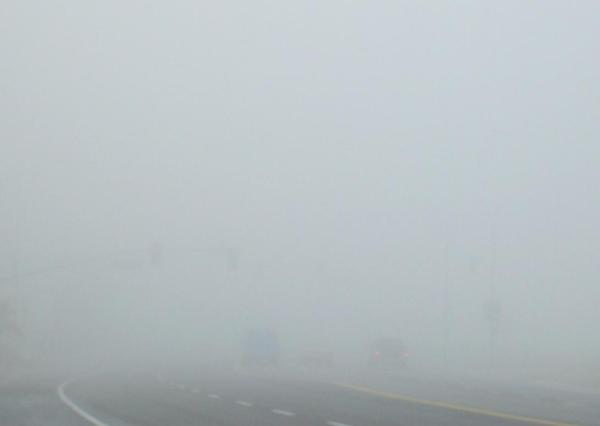 Today was a foggy day. At about 1030 AM or so, the spouse and I went for a walk break. It was still foggy and the air was tinged with whiteness, as it often is just before snow falls. Only we don’t get snow here by the rivers. Rarely, anyway. The last time I think we got snow in my town was in 1990, so that’s a long while ago. Or at least it was cold enough for snow. I remember I was out of town and got a call that there had been snow in 1990. But I digress. My thoughts are sticking and laying heavy, just like the fog.

While walking the conversation went sort of like this:

“Does it happen anywhere else?”

“I don’t think so. I think it’s just here. [Professor friend] told me about it. And she pronounced it the right way, too—it’s too-lee fog. Like Julie. Or unruly.”

I always think about poetry when I experience Tule fog. It’s not like a rolling, dramatic San Francisco Bay Area fog. That kind of fog, at least in the summer, blows in on an afternoon and hangs out until morning. You can watch it come in over the Bay, as I often did from a rooftop in Berkeley one year. This poem often comes to mind:

I think when Carl Sandburg was writing about fog, he wasn’t writing about Tule fog. Sandburg’s fog moves on, but Tule sits in damp expectation and thickens the air in the valley. Tule arises from some sort of delta marsh grasses with the same name. The LA Times calls it a type of “radiation fog” – which does little to ease the mind of the inhaler of the moist air.

Last month, when we were excitedly hoping to view the Jupiter-Saturn eclipse, the Tule fog rudely and thickly landed and we were lucky to see our next-door neighbor’s holiday lights that night.

The next day, the fog was gone and the night was clear. But the conjunction was no longer visible in the sky.

It was a reminder, the fog is not consistent. It doesn’t move in and set up house for days. It comes and then it leaves. Quietly, with no fanfare.

Maybe Sandburg was right, after all.