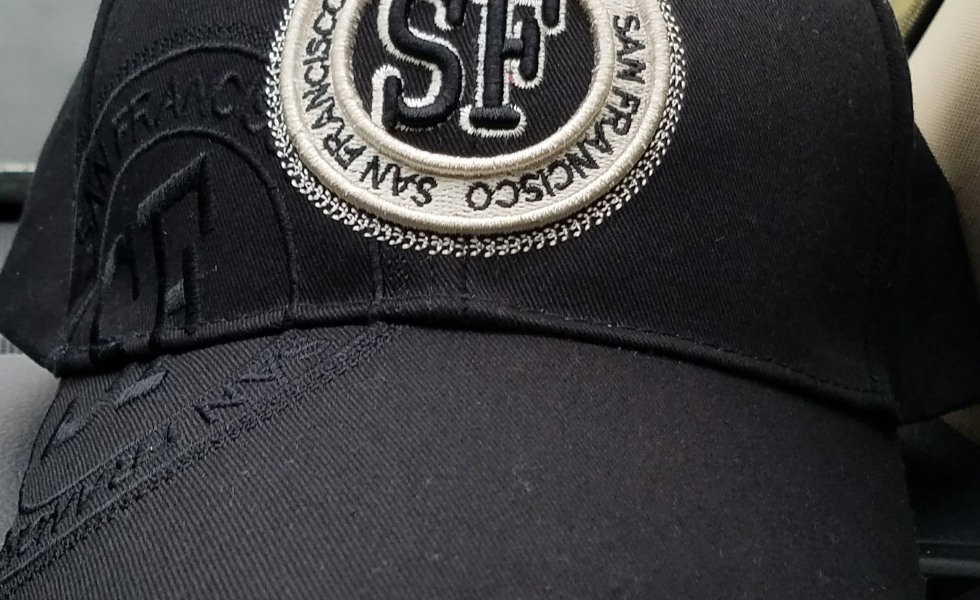 When I started this morning’s run, I realized, oh crap, I left my hat in the house!  I usually wear a cheap baseball cap, one I picked up a couple of years ago at Fisherman’s Wharf in San Francisco. I wear it to keep the sun out of my eyes. I realized, as the sun hit my forehead and flashed off my glasses, that I wear the hat to disguise myself, too. Here I was, visible, an older woman with salt and pepper pandemic hair, identifiable, running at a turtle pace, but running all the same. I couldn’t be a faceless, nameless hat-wearing runner. I was seen. And that makes me uncomfortable. Who among us hasn’t judged a runner or a jogger, usually the slightly pudgy one who looks like they’re on the edge of a heart attack? I know I have. And usually from the front seat of my passing vehicle. It’s easy to judge when we’re in a comfortable seat with the air conditioner on and some grandiose music playing on our car stereos. Easy to see, judge, and laugh.

At least I hadn’t forgotten my cell phone and the hard cover I now place over the front. Last week or so, I was running to meet a daily #RunBet goal (RunBet is a game where you “bet” that you will complete your tasks. At the end of it, you win by getting your money back plus a little from those who didn’t complete the challenge.). Anyway, #RunBet motivates me to get out there every day, and I was putting in an effort to complete my run. I use an app called RunKeeper to track my mileage and pace, and last week or so the default lady voice was telling me I was on target and that I was about halfway done with my mileage.  I fumbled with my coverless phone and realized I had shut the tracker off. In the middle of a run. I would either have to hang up my shoes for the day or start a new run. I don’t know how you would feel, but I was stinking mad. I had gotten up at dawn and put on my shoes. Got outside. Started moving. And here, due to a technical glitch, it wouldn’t even count? Ugh. So I did what I usually do when I get really mad. I worked harder. I ran into areas I never go. I ran by the kids, who were waiting for me to finish the scheduled run, and told them because of an equipment failure, I’d be running longer. But I got it done. Sweaty, feisty, and tired, I got it done. And I now put an unswipeable hard cover over the face of my phone. So this morning that was a good thing I had going for me.

About three quarters into today’s run, I was running on the shady side of the street (remember: no hat). Sacramento has a lot of trees and in the summer it’s a blessing–we’d bake if we didn’t have all these lovely leafy shade trees. So I was running on the shady side, and I looked to my left. There, in the wooded bushy corner of someone’s front yard, I made direct eye contact with an older, white-bearded African-American man in a clean white T-shirt. He was squatting. As in, taking his morning constitutional. Or “doing #2” as the kids would call it. Now, I’m not in the downtown, I’m running in a fairly nice suburb. I’m not in SF or LA or even San Diego. (Pooping outside is a popular pastime in those cities.) I’m in a fairly quiet, nicer part of Sacramento. And this guy decided to use someone’s front lawn as his personal bathroom. I’m not sure I’m having first world problems anymore. This feels more like all world problems. No Chariots of Fire for me on my run. Just Forrest Gump. And I stopped worrying about “being seen.” I’m not the only one out there, being observed, being judged. We’re all being judged. But there’s one thing I was glad about when I got home and hung up my shoes. There’s no hiding places on my front lawn. If someone needs to take a toilet break, it’s less likely to be in front of my house. I was back to my first world thinking. If I see that guy on the street, though, I suspect we will recognize each other. Hopefully not in similar circumstances in the future.

I’m off to upload my run into my #RunBet. Twenty three more runs to go before I WIN my money back.

(Somewhat) Daily News from the World of Literary Nonfiction

Butter Makes Your Pants Fall Off

Food is the Best Medicine and Fat is the best Food